About the Perseverance Fund 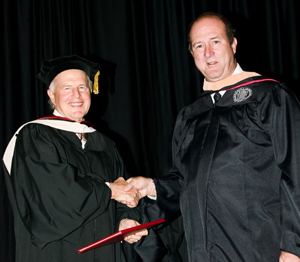 The Perseverance Fund was created by the EMBA Class of 2009 and dedicated to their classmate Paul Cravens. Paul’s personal journey before and during his graduate experience inspired his classmates to create a fund that would recognize a classmate who embodied Paul’s character. For the classes of ’08 and ’09, Paul was a selfless, caring, and determined friend who inspired others as a man of integrity, compassion and resilience. Paul began the EMBA Program in 2006 but months into the program lost his home in a house fire. Undaunted, he rebuilt his home himself and returned to the program in 2007. As a classmate, Paul was unfailingly kind, always supportive and led with joy and fun. Throughout his life, Paul has been defined by resilience and humility. As the sole survivor of a Christmas Eve 1992 car accident that claimed the lives of his wife and step children and dominated headlines across the state, Paul became a powerful symbol of needed change in drunken driving laws in New Mexico. He went on to help catalyze a statewide movement that prompted a sea change in the way New Mexico combats drunken driving. To honor Paul’s example and to encourage fellow EMBA classes to support one another, the Perseverance Fund Award is awarded annually to a second-year student chosen by a group of his or her peers who embodies the spirit of the award. 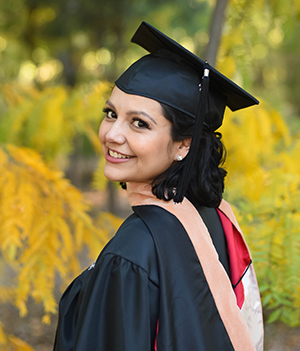 “I am a person who is generally optimistic in the face of obstacles, but my years in the EMBA program definitely tested that optimism. I am so honored to be a recipient of the Perseverance Award. I was shocked and grateful to have my hard work and difficult decision to stay with my class recognized.

When I got the call notifying me that I was accepted into the EMBA Class of 2016, I was surprised, excited and nervous. My classmates and I started our amazing journey in the summer of 2014 and, in November 2014, I was devastated by my diagnosis with breast cancer. I assumed I would need to take time off as I went through my treatment. Thankfully I had two conversations that changed my mind. My husband gently told me to try continuing with the program and decide later to take a semester off if needed. Second, my amazing EMBA team rallied behind me and reassured me that they would be there to help me out along the way.

Over the next year with the support and encouragement of classmates, professors, EMBA staff, my husband and my family, I survived my treatment and we survived our classes. That year I went through fertility preservation, chemo, a mastectomy, radiation and reconstruction. I was lucky to have huge amounts of support during this journey. With those people behind me, I not only completed my EMBA but excelled in my coursework. When my optimism faded, my classmates and family were there to build it up again. They enabled me to succeed in spite of everything I was going through. I graduated on time with my class, seven months pregnant with my first child, and just as optimistic as ever!

Thank you for the honor of naming me the recipient of the Perseverance Award and thank you to everyone who made it possible- my amazing husband, my family, my EMBA family at Anderson and my irreplaceable EMBA team (Vivian, Nico, Audra and Julie).”

NOW Accepting Applications for the Class of 2023

View the admission requirements to apply for admission to the Executive MBA.